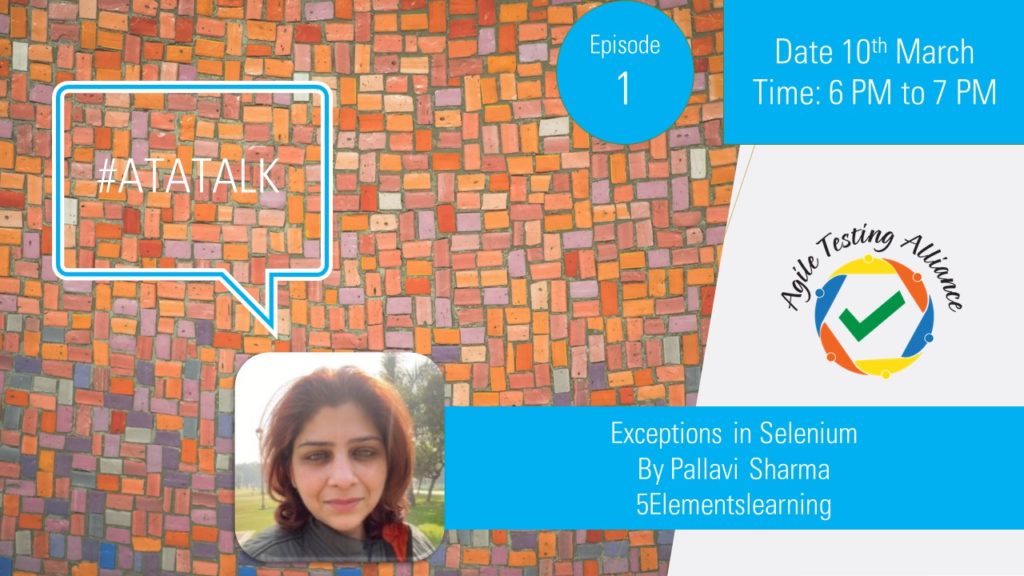 About the Session:
In this community session, Pallavi talked about the different exceptions we come across Selenium, the reason behind them and some of the exception handling techniques the different programming languages provides us with.

EXCEPTIONS IN SELENIUM
Errors and Exceptions are part and parcel of programming. I have always believed and experienced that we learn more from the mistakes we make, even in programming. And when we use a tool which implementation is largely driven by the programming language we are using to implement, we should be aware about the inner architecture of the tool so to make better decisions and code structure to use it. Selenium is one such tool, which is the centre point of this discussion. A tool which allows us to automate the browser, and what we do with it is entirely up to us, as mentioned on the https://www.selenium.dev the website of Selenium. When we write code, we are bound to introduce errors into it. We are bound to make mistakes unintentionally most of the times. And the errors we make in our code can be broadly classified as – a. Syntax Error b. Runtime Error c. Logical Error

Syntax Error-
We see this error when we make a mistake at the syntax level of the code, and it is caught by the smart IDE’s now available to us.
Runtime Error-
The code may look fine to us, but at the time of execution it will throw an error/exception.
Logical Error
This error is caused, when at the algorithm level our solution itself is wrong.

Exceptions, which we encounter are generally raised from the run time errors, or they might be caused because of other environmental issues around the code. In this ATA Talk, we discussed about specific exceptions with respect to Java as a programming language, which we see while working with Selenium, and where can we know more about them.

The stale element exception is generally raised when we are trying to work on an element which is no longer associated with the DOM.

And element not interactable exception is raised by an element, which though may appear in the dom, but is hidden or not visible, thus selenium cannot work with it.

For more information on it you can visit the following links

About #ATATALK:
ATATALK is a new community initiative of ATA

ATA has held many conferences and meetups in the past years. In 2020, we managed to hold 2 virtual conferences and 6 virtual meetups. This year we started off with a virtual SeleniumSummit21 . While we are still grappling with Covid situation and physical events are yet to kick off. We thought about having a 45 minute to 60 minute live learning / interactive capsules. Thus allowing us to break the monotonous regime and quickly get in new learning bytes. Enabling us to connect with each other and with the budding/established speakers. #ATATALK is to fulfill this need. The idea around #ATATALK is to give all budding speakers a chance to share their ideas and knowledge with the community.

ATATALK is thus all about discussing fresh ideas, innovative thoughts, solving problems, treading on unchartered waters or learning something which is important in todays scenario and in the process creating a larger community of thought leadership.

Everybody is welcome to attend #ATATALK and also be a speaker at #ATATALK.

Participants also got chance to interact with Pallavi live in this wonderful #ATATalk initiative.

Here is the video link of the session: